We are pleased to bring you the following additions and enhancements to Developer Portal features in 19R1. REST API features added in 19R1 only affect API v19.1, unless otherwise noted. You can learn more about the 19R1 Release in Vault Help.

Metadata Definition Language (MDL) is a metadata management framework and an associated language to build and manage Vault configuration components. With MDL, you can create and execute scripts on your vault to automate complex or repetitive configuration changes. For example, changing the configuration of 100 document types requires at least 100 clicks in the Vault Admin UI, which was laborious and error-prone. With MDL, this task can be scripted once and subsequently completed in seconds.

Vault developers can use the Vault Java SDK to send message notifications as events occur in a vault. Spark messages are lightweight, signed messages sent via HTTPS. Outbound messages are processed by a queuing system to provide reliable delivery. Inbound messages received from another vault is processed by custom Java SDK code. This feature enables near real-time integration between vaults and with external systems.

This feature allows customers to execute custom Java SDK code before or after a manual role assignment or un-assignment Event on an object record. Customers can use record role triggers on BEFORE events to perform specific validations, and AFTER event triggers for cascading access or sending notifications after role assignment. Learn more about role triggers.

Event Action support for Vault Java SDK actions is not automatically available. If your organization would like to use this functionality, please contact Veeva Support.

To make an action available for configuration as a document event action, specify the usage as LIFECYCLE_ENTRY_ACTION in @DocumentActionInfo.

Automated Image Renditions allow Admins in PromoMats and MedComms vaults to define specific renditions types for image files and apply them to any necessary document types, subtypes, or classifications through the UI. API users can use the existing Document Rendition endpoints to retrieve, download, or delete the new rendition type.

With this feature, Vault OAuth 2.0 / OpenID Connect profiles will now contain a PingFederate Authorization Server specific configuration option called "Access Token JWKS Endpoint". Use this option to specify an additional JWKS endpoint containing the validation keys used to validate signatures for JWT access_tokens. This will enable Vault to validate the signatures of JWT access_tokens locally instead of using a remote Authorization Server (AS) callout, thus improving the stability and performance when integrating with PingFederate AS.

For additional tracking purposes, every Vault REST API call accepts an optional client_id to represent an external integration client. As of this release, client_id supports uppercase characters in all versions of the API. Learn more about Client ID in the REST API Documentation.

This feature improves Vault Formula capabilities, usability, and performance. By introducing new operators, new functions, and the @User system variable, customers can streamline their formulas and perform new calculations. Customers may also return a null value in formulas and are no longer required to add an object prefix to each object reference.

Starting in API v19.1, metadata APIs for objects and workflows where object fields are referenced in formulas will have the object prefix of the reference removed, leaving only the field and relationship.

All existing expressions will continue to function as they do today.

They then pass in status as the body parameter, and either Active or Inactive as the status value.

With this release, we’ve made significant enhancements to our VQL documentation to improve content, site navigation, and overall usability. The revised documentation now uses a more logical and structured organization, which means some content may not be in the same place. However, any existing bookmarks and links should redirect you to the right place. See below for more detailed information about VQL’s revised documentation.

Previously, the VQL documentation was located under the References heading. We’ve moved this to its own section under the Documentation heading. 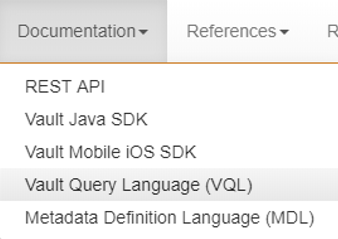 We’ve added a section with details about the /api/{version}/query endpoint to the v19.1 REST API under the References tab. 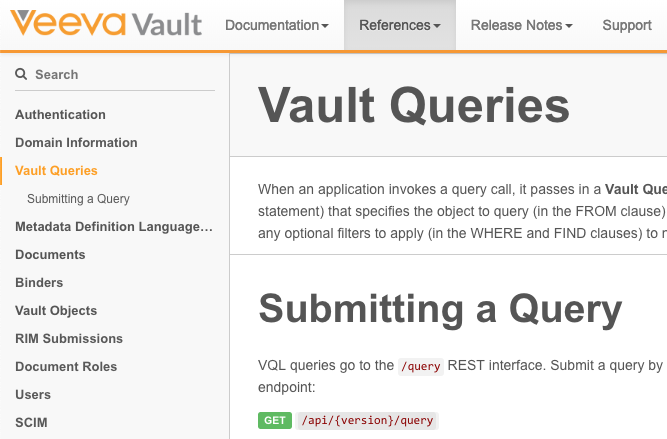 We’ve made the following updates to VQL’s content and structure: